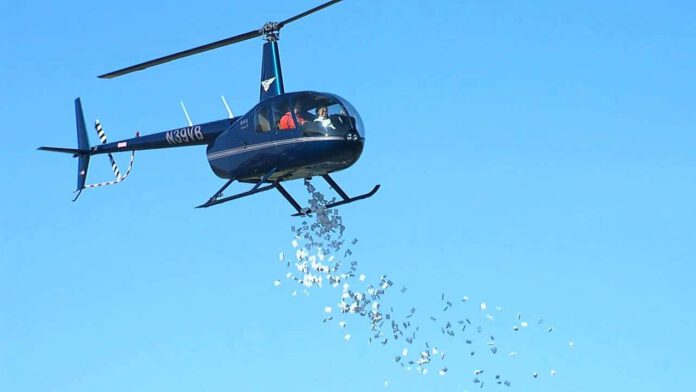 Business Insider has reported that HSBS is discussing the idea that central banks could push for blockchain-based digital currency systems in order to capitalize on transaction transparency and create a clearer picture of a country’s financial system.

According to a draft document European markets editor Mike Bird obtained, UK banking group HSBC has outlined how it believes the blockchain could be used to facilitate or enhance unconventional central bank policies.

According to a note from HSBC, central banks could use the blockchain for a policy that’s even more unconventional than quantitative easing. It could apparently make “helicopter drops” of money, sent from the central bank to households, much easier. The phrase comes from Nobel-winning economist Milton Friedman, who referred to dropping money out of helicopters decades ago, meaning a direct stimulus from the central bank that didn’t have to go through the private credit system.

Here’s how they think the blockchain could help with that:

If we move towards an economy where all transactions become recorded in real-time on a Blockchain type of technology, it will not be too dissimilar to the current eco-systems that many ecommerce giants have around the globe. Online e-commerce stores are able to give out loans to merchants without collateral, because they know all the flows already from the merchants’ point of view: from how much people are spending to the conversion rate of pages viewed to purchases. In the same way, a modernised monetary transmission system, based on real-time big data analysis through Blockchain, could allow the government to balance the economy more efficiently and systematically.

In short, the blockchain would allow the government to know a huge amount more about what’s actually happening in the economy.