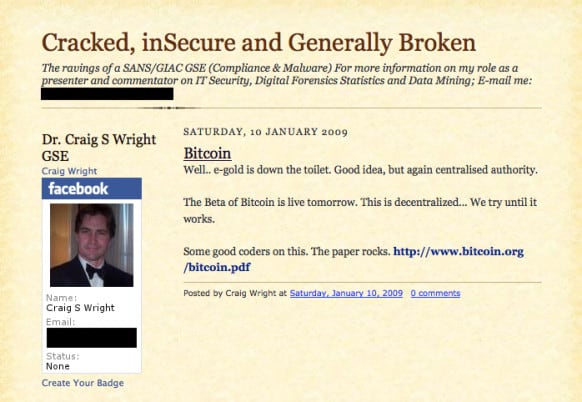 Satoshi Nakamoto, the mysterious figure behind the creation of Bitcoin and the Blockchain and the patriarch of an entire economy worth billions of dollars has been a pseudonymous individual… At least until now.

It appears that reporters at Wired were given access to documents leaked by an anonymous source close to Dr. Craig Steven Wright — the man the magazine has fingered to as the genius behind bitcoin.

In the last weeks, WIRED has obtained the strongest evidence yet of Satoshi Nakamoto’s true identity. The signs point to Craig Steven Wright, a man who never even made it onto any Nakamoto hunters’ public list of candidates, yet fits the cryptocurrency creator’s profile in nearly every detail. And despite a massive trove of evidence, we still can’t say with absolute certainty that the mystery is solved. But two possibilities outweigh all others: Either Wright invented bitcoin, or he’s a brilliant hoaxer who very badly wants us to believe he did.

And the evidence is pretty damning.

The first evidence pointing to Wright appeared in mid-November, when an anonymous source close to Wright began leaking documents to Gwern Branwen, a pseudonymous, independent security researcher and dark web analyst. Branwen provided those documents to WIRED, and they immediately led to several direct, publicly visible connections between Nakamoto and Wright:

An August 2008 post on Wright’s blog, months before the November 2008 introduction of the bitcoin whitepaper on a cryptography mailing list. It mentions his intention to release a “cryptocurrency paper,” and references “triple entry accounting,” the title of a 2005 paper by financial cryptographer Ian Grigg that outlines several bitcoin-like ideas.

A post on the same blog from November, 2008. It includes a request that readers who want to get in touch encrypt their messages to him using a PGP public key apparently linked to Satoshi Nakamoto. A PGP key is a unique string of characters that allows a user of that encryption software to receive encrypted messages. This one, when checked against the database of the MIT server where it was stored, is associated with the email address satoshin@vistomail.com, an email address very similar to the satoshi@vistomail.com address Nakamoto used to send the whitepaper introducing bitcoin to a cryptography mailing list.

An archived copy of a now-deleted blog post from Wright dated January 10, 2009, which reads: “The Beta of Bitcoin is live tomorrow. This is decentralized… We try until it works.” (The post was dated January 10, 2009, a day after Bitcoin’s official launch on January 9th of that year. But if Wright, living in Eastern Australia, posted it after midnight his time on the night of the 9th, that would have still been before bitcoin’s launch at 3pm EST on the 9th.) That post was later replaced with the rather cryptic text “Bitcoin – AKA bloody nosey you be…It does always surprise me how at times the best place to hide [is] right in the open.” Sometime after October of this year, it was deleted entirely.

Wired admits that he might just be a genius hoaxer hell-bent on implying that he is Satoshi Nakamoto.

You can read the fascinating article linking Wright to Nakamoto over at Wired.

Gizmodo also received a trove of documents from the source and published an article soon after Wired and given their version.

Several of the emails and documents sent to Gizmodo point to a close relationship between Wright and Kleiman, a U.S. Army veteran who lived in Palm Beach County, Florida. Kleiman was confined to a wheelchair after a motorcycle accident in 1995, and became a reclusive computer forensics obsessive thereafter. He died broke and in squalor, after suffering from infected bedsores. His body was found decomposing and surrounded by empty alcohol bottles and a loaded handgun. Bloody feces was tracked along the floor, and a bullet hole was found in his mattress, though no spent shell casings were found on the scene. But documents shared with Gizmodo suggest that Kleiman may have possessed a Bitcoin trust worth hundreds of millions of dollars, and seemed to be deeply involved with the currency and Wright’s plans. “Craig, I think you’re mad and this is risky,” Kleiman writes in one 2011 email to Wright. “But I believe in what we are trying to do.”

Contacted by phone, Wright’s ex-wife Lynn recalled her husband working on Bitcoin “many years ago,” but noted that he “didn’t call it Bitcoin” at first, but rather “digital money.” She also confirmed Wright’s friendship with Dave Kleiman: “I knew Dave…I knew they were friends and they talked about stuff, different things that were happening in the geek world…half the time he was taking I wouldn’t listen, hence the ex.” When asked specifically if Wright was the inventor of Bitcoin, Lynn replied “I’m not going to comment on things that we talked on.”