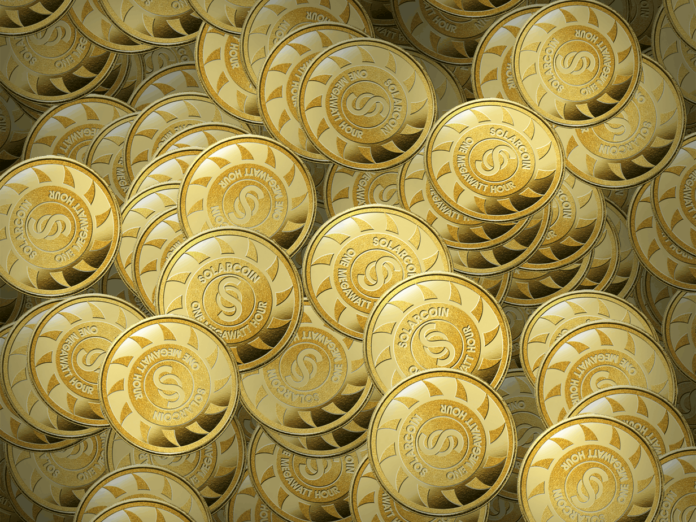 Launched in January 2014 and inspired from Bitcoin and Blockchain Tech whereby transactions are recorded and validated by a peer to peer network of computers, SolarCoin presents the additional advantage of being coupled to a real-world asset: solar electricity.

Each MWh of solar electricity produced by a photovoltaic installation awards one SolarCoin. Put another way, one can also understand that SolarCoin is Solar Miles for solarelectricity generation… and it’s free!

What is the use of SolarCoin? In itself, a currency has a value assigned to it by a community of users, a social group, as a means of payment and value circulation.

Additionally, SolarCoin has a social utility for its community: by rewarding the owner of a solar photovoltaic system, SolarCoin acts as an incentive, stimulating the implementation of solar power worldwide. With a forward value aimed at a couple dozen dollars, SolarCoin may thus reduce the payback time for the solar installation as well as increase its returns.

The idea of ​​creating a renewable energy-based  digital currency is derived from an academic paper “Deko: An electricity-backed currency proposal” in parallel to the publication of “The Nature of Value“, available from Columbia University Press. Nick Gogerty, its author, states that the initiative could provide an effective incentive for people to purchase solar panels and possibly act as a substitute to feed-in tariffs currently in place (FIT, netmeetering…) and encourage more people to participate in renewable energies.

SolarCoin is already present in 17 countries and is intended to be circulated worldwide: any owner of a solar photovoltaic installation may apply and claim his SolarCoinsfor free. To do so, the solar owner simply registers his solar installation online with data proving the existence and operation of his solar installation, using the form available on the solarcoin.org, solcrypto.com and solarchange.co websites (soon).

The grant mechanism for delivering SolarCoins is based on a simple formula: 1SolarCoin (§ SLR) per MWh of solar electricity generated, regardless of where in the world the energy is produced. This means that a residential solar installation producing yearly 4MWh will receive annually § 4SLR.

SolarCoins are granted by the SolarCoin Foundation to the Wallet Address of the solar owner and can be kept online through the SolarChange platform. Thereafter, every 6 months, SolarCoins will be sent to the solar owner, taking into account the electricity produced, and for as long as the solar installation will be connected to the Grid.

For the first online registration, the grant is also retroactive to the interconnection date to the Grid, or January 2010, whichever comes first. SolarCoin therefore acts as a reward to the world’s  7 million current solar owners and as an additional incentive for future solar owners.

Currently, already more than 70,000 SolarCoins have been granted to owners of a solar photovoltaic system or CSP (concentrated solar power). This is a tiny fraction of what is to be granted, given the 240GWp of solar panels already installed worldwide at the end of 2015. This figure therefore represents 240million SLR to be potentially granted. By 2030, the International Energy Agency estimates that installed capacity could rise upwards of 900GWp and targets 5.500GWp by 2040. 98.5 BillionSolarCoins were created and set aside to reward solar energy producers.

The digital currency is managed by the SolarCoin Foundation which is composed of renewable energy experts as well as economists who believe that solar energy should cover a significant part of our world’s energy needs.