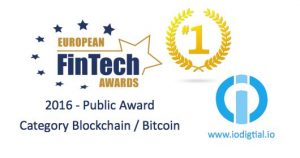 Blockchain pioneers,  the Dutch team at I/O Digital were early in the Blockchain space launching I/O Coin and their Proof of Stake Blockchain network in July 2014.

Since then the company has evolved and recently won the public award in category Blockchain of the Euro Fintech Awards and garnishing the most public votes received at the event.

“Winning the FinTech awards and our restructuring for the future since January 2016 on the I/O Digital project has got a lot of extra attention,” said Joel Bosh, CEO I/O Digital.

Since then the I/O Digital project has evolved into a full service Blockchain company, developing projects and setting new standards in the Blockchain ecosystem.

After developing basic side projects to support I/O Coin as a digital currency the team at I/O Digital started to think about the future the underlying technology behind their cryptocurrency.

And in October 2014 the team defined a new project called DIONS which would turn out to change the focus of the company completely.

DIONS represents “Data on the Blockchain” And while most digital currency companies were still focusing on new wallets, public adoption and functionalities based on the coin the I/O team began to focus on the back-end technology – the Blockchain – before it even was a buzzword in the industry.

Since then the team has had full focus on delivering an outstanding, secure and fast Blockchain that can support “data”.

Think of storing copyrights in a decentralised network and the ability to create arbitrary services that use this network.

Since 2015, large corporations, banks and institutions are now investigating and investing in Blockchain technology. I/O Digital’s ultimate goal is to have companies use Blockchain technology for their businesses to gain competitor advantage, synergy between services and operate with less costs or even add new services to their portfolio.

Another one of their newer products is a Blockchain ecosystem with a limitless range of potential applications, storing all of data in a single Blockchain to make sure to have an infrastructure that can adapt and scale to accommodate all types of services.

Developed over a twelve-month period, Chameleon I/O is a framework which will allow for the creation of any number of unique and interoperable I/O Digital sidechains. These auxiliary (private) Blockchains will each have unique properties suited to the particular set of services and applications that they will support.

“This network of Blockchains, or “superchain’, will afford unparalleled flexibility to users, allowing any number of configurations to be seamlessly adopted depending on the use case,”  added Bosh.

I/O Digital has been approached by venture capitalists, private entities, companies, investors, community members, that want to help grow and donate or even invest to the I/O Digital project.

To accommodate this, the team has decided to form an official foundation for the open source developments of I/O Coin and it’s Blockchain.

“During many of our meetings with companies and VC we quickly learned that we needed to have a more robust structure. They have also put in means for the future securing of the private keys. With setting up the foundation it will make it all possible. It also ensures that the I/O Coin Blockchain will stay in the hands of our Non Profit organization,” said Richard Groen – COO I/O.

The team and community of I/O Digital has a big heart for charity as well. Over the past 20 months they have donated more then $10.000 to different charities.

With the foundation they wil continue to do so. Ten percent  of every donation made to the foundation will be spent on charity and the community co-decides which charity will receive a donation.

More information about the project can be found on www.iodigital.io