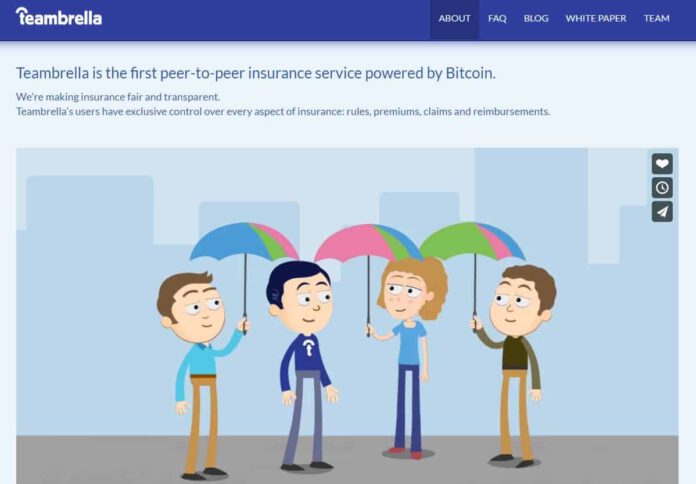 Teambrella is the first peer-to-peer insurance service backed with Bitcoin and the creators say its users have exclusive control over every aspect of insurance: rules, premiums, claims and reimbursements making insurance fair and transparent.

In a recent whitepaper, the writers, Alex Paperno, Vlad Kravchuk and Eugene Porubaev, say that most insurance services are inefficient and non­-transparent and they say they have designed a way to solve these issues by implementing a system that provides peer ­to­ peer insurance which Bitcoin Wallets play an integral part of the design.

We have proposed a system for peer ­to ­peer insurance. Users of the system can create or join teams, where each member is a peer. Each peer is both a provider and a consumer of the insurance service and each premium payment is, in fact, a part reimbursement of a claim. Peers collectively administer all functions of their team by voting. To make the voting process efficient we propose chainable proxy voting, with voters being compensated for their time. To enforce premium payments we introduced distributed Bitcoin wallets that prevent spending not sanctioned by other peers. Distributed wallets are not server­ controlled and can be transferred from if the server(s) is compromised.

With Teambrella,  the users will have mutual control on most aspects of their insurance including risk evaluation and processing of payments and the mutual control is implemented via a voting mechanism that can be delegated to proxies. In order to ease the burden of payments between peers, they use Bitcoin as a mean of providing coverage and payment of reimbursements.

The framework for the P2P organization includes a decision­-making layer and a payment layer. The payment layer is based on Bitcoin technology. The decision­making layer consists of a server(s) used as a medium for communication and voting.

Upon closing of voting the server(s) prepares a set of bitcoin transactions from team members’ distributed wallets to the claim submitter’s pay ­to address. Additional transactions may be created for compensations for voting.

You can see view and download whitepaper at Blockchain News Library along with over 200 other Blockchain whitepapers and reports from 2015-16 here.