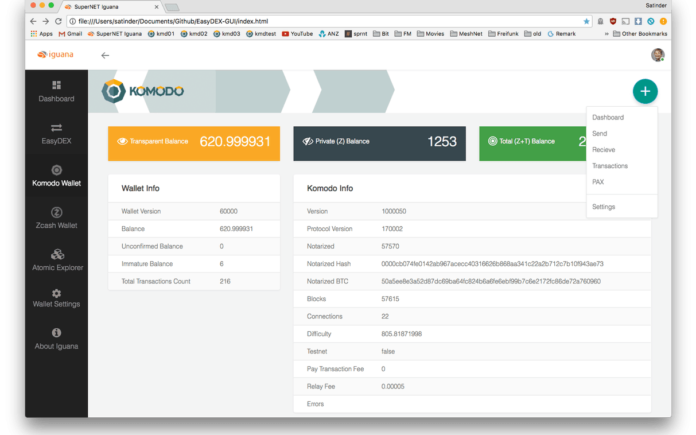 SuperNET, the team behind the Komodo Blockchain platform has announced the launch of decentralized EasyDEX exchange platform.

The SuperNET team, headed by the infamous coder JL777, have developed a series of projects capable of interconnecting with each other to complete themselves in the SuperNET ecosystem. These include EasyDEX and most recent, Komodo Platform. Unlike most projects in the crypto industry, these projects don’t seek to compete with Bitcoin or any other cryptocurrencies. Instead, they focus on creating tools and features that benefit all blockchain projects by strengthening them further. These tools include;

The SuperNET team’s white paper describes the implementation of EasyDEX – a decentralized exchange that not only allows users to exchange cryptocurrencies among themselves without entrusting their funds to a third party but also a system that provides speed and liquidity, a key component that has been missing from almost every centralized exchange.

Unlike other alternatives that have been implemented before, EasyDEX does not rely on proxy tokens, pegged assets or gateways to exchange cryptocurrencies, as these remove some counterparty risk. Also, in order to prevent any shortcomings in speed and convenience (which the centralized platforms are known for), the platform exchanges cryptocurrencies directly through an atomic cross-chain protocol.

The EasyDEX exchange allows users to maintain their privacy, which is much valued in the cryptocurrency community. This is enabled by the privacy layer in the order matching process which makes it possible to execute trades without establishing a direct contact with the user’s IP.

As the world of blockchain evolves, the community and services built around it will also evolve along with it, eventually making complete decentralization the only way forward.

SuperNET is a collaborative community of participating cryptocurrencies and their development teams, alongside innovative coders, networking experts, social-media and commercial development specialists and third-party service-providers. They seek to create a united platform of technologies focusing on the establishment of decentralised delivery of previously centralised online services.

Centralized cryptocurrency exchanges, despite being extremely useful and convenient, deviate from the very premise on which Bitcoin was founded: The trustless exchange of value. These exchanges require users to convert their funds into IOU (I Owe You) tokens in order to exchange them within the market. When a user wants to withdraw his funds, the IOUs are converted back into real cryptocurrencies. However, this poses a huge risk for the user as centralized exchanges are prone to inside thefts and outside hacks, something that has been demonstrated repeatedly by the recent happenings in the cryptocurrency industry. Customers of these platforms have lost millions of dollars’ worth of Bitcoin and other altcoin funds to hackers and cybercriminals.

There are few decentralized alternatives available at the moment, but more than often they lack the liquidity and convenience that users are otherwise used to. This may soon change as the team behind the SuperNET project has recently released a whitepaper describing the implementation of a fully functional and decentralized exchange.