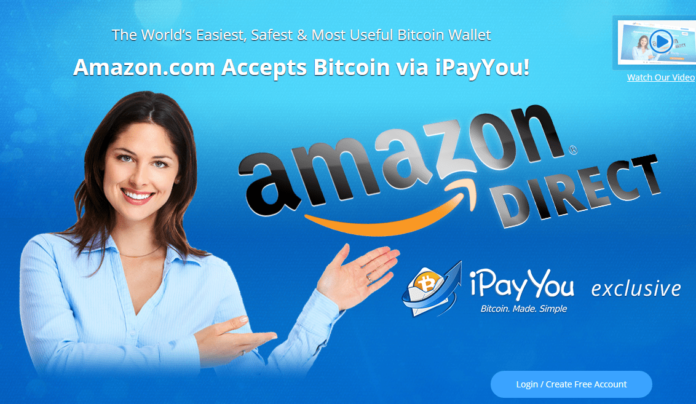 Seattle-based company iPayYou.io, is planning to make Bitcoin a useful currency for all this holiday season and hasannounced “Amazon Direct,” an unprecedented way for Amazon to effectively accept bitcoin from consumers. The feature has been under development for months by iPayYou, whose CEO is Gene Kavner, a former worldwide director at Amazon.

“Amazon Direct is the best way to spend bitcoin: after determining what you want on Amazon, you can ‘automagically’ transfer bitcoin from iPayYou to Amazon. Amazon Direct is revolutionizing the way consumers are able to spend their bitcoin by granting them access to buy more than 100 million products at the world’s largest store,” said Kavner, iPayYou Founder and CEO.

iPayYou’s “Amazon Direct” allows users to seamlessly transfer any dollar amount of bitcoin from their existing bitcoin wallet on iPayYou to Amazon. iPayYou has added a new “Amazon Direct” tab to the platform, where users can determine an amount of bitcoin to transfer. After specifying the destination account at Amazon.com, “Amazon Direct” becomes a one-click feature where users can exchange their funds from Bitcoin on iPayYou to USD on Amazon in seconds. Upon completion of the transfer, users will be able to purchase items as they please and take advantage of their bitcoin on the leading global marketplace.

“During my time as an executive at Amazon, we closely studied the friction points and obstacles faced by shoppers, including and especially with payments. Bitcoin is a solution to so many of those problems,” added Kavner. “That’s why today – in time for the holiday season –we’re launching the most direct way to spend bitcoin anywhere, starting with the world’s largest retailer.”

This latest feature follows iPayYou’s recent gift card integration, which allows users to instantly purchase original gift cards with bitcoin from some of the most prominent retailers including Starbucks, Amazon, Best Buy and iTunes.

In addition, it boasts distinguishing features including the ability for users to cancel transactions and send payments via email and Twitter, all without requiring the recipient to have a pre-created account or bitcoin wallet of any kind.

“We want bitcoin to be the everyday default currency. The only way for that to become a reality is to provide consumers with practical ways to spend their bitcoin – that is our grand mission, something the team at iPayYou is working tirelessly to achieve,” added Kavner.