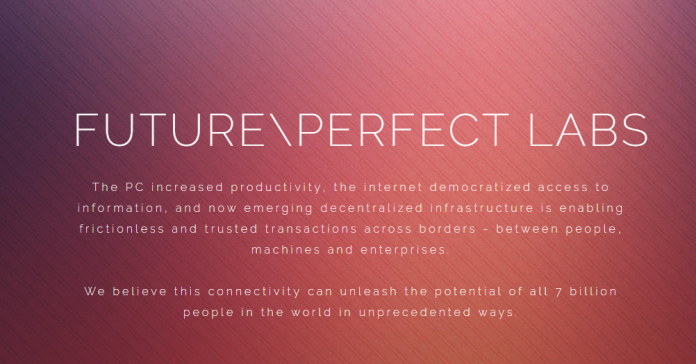 Future\Perfect Ventures’ Jalak Jobanputra, a veteran venture capitalist and an early champion and investor in some of the world’s fastest growing Blockchain start-ups, is launching a Lab that will drive innovation and foster ventures built on Blockchain and decentralization, with an emphasis on the intersection of  transformative technologies such as IoT, Artificial Intelligence and Security.

The Future\Perfect Lab launches at a time of unprecedented demand among public and private enterprise to learn, experiment and apply the principles and ideas from ground-breaking and promising Blockchain, expected to be a $7.74 billion market globally by 2024 (Grand View Research), which together with other distributed technologies is predicted to drive exponential growth in an already $2 trillion mobile and cloud-based economy.  In addition, the Lab seeks to harness cross-disciplinary talent and resources to deliver solutions and unlock opportunities related to decentralized connectivity, including new cryptocurrency such as Bitcoin and Ethereum, in a climate of heightened global security concerns.

The Future\Perfect Lab, to be anchored in New York City, is being overseen by Jobanputra and comprises an assembled braintrust of entrepreneurs from Future\Perfect Venture’s portfolio companies, including Abra, Blockchain, Blockstream, Bitpesa and Tokenize (formerly known as Case), as well as leading technologists from the Blockchain, security and data science sectors.  Participants will also include partners from corporate, academic, policy-making and philanthropic arenas, who will collaborate on new applications of these emerging technologies.

“I see Blockchain as more than a technology; it is a movement.  The concept of decentralized connectivity and transactions is spawning transformative ideas that are already rapidly enriching and enhancing the societies, economies and cultures of people around the globe, and I believe it will create a 10X growth impact on the already sizable mobile and cloud-based tech market,” said Jobanputra  “We’re aiming to satisfy the enormous appetite among business, policy-making and academic circles for a constructive environment to experiment and deploy these ideas.  At launch, we have as a bedrock the benefit of tremendous talent, participation, ideas and applications from Future\Perfect’s portfolio companies.  Our mission with the Lab is to harness this talent and these movements to unlock big ideas, build secure, inclusive and frictionless technologies and then apply them in profound ways that will improve how we live and work, create, govern and transact.”

“We share Jalak’s vision, and in particular believe that distributed technology unlocks the potential for an individual to protect and control their identity,” said Melanie Shapiro, CEO of Tokenize, a Future\Perfect Lab participant.  “Moving towards a system where individuals have total ownership of their identity is a necessity if we are to be truly secure in a digital world, and these Blockchain technologies help move us away from central authorities having complete control over our data. The Lab will allow companies like ours to develop solutions with these kinds of distributed technologies – which are exciting, but largely misunderstood — and allow us to better collaborate with other teams to spark innovation, solve problems and create more applications in the Blockchain, AI and IoT spaces.”

Jobanputra has two decades of investing experience in the tech sector, including with Lehman Brothers, Intel, Omiydar Network and New Venture Partners.  During her tenure at the New York City Investment Fund during former Mayor Bloomberg’s administration, she helped to form NYC Seed, which funded start ups, and the Fintech Innovation Lab. She launched FuturePerfect Ventures in 2014 to focus on funding early stage companies involved with distributed technologies such as Blockchain. Prior to Future\Perfect, companies she has backed include TxVIA (acquired by Google), Yodlee (IPO) and Financial Engines (IPO) among others.

“This next wave of innovation must be more inclusive than previous ones, and it’s important that we pay attention to the societal and economic implications of technology that we unleash into the world,” said Ms. Jobanputra.  “Our vision for Future\Perfect Lab is to provide both a physical and digital space in which we can truly collaborate to create a better future for all of us.”