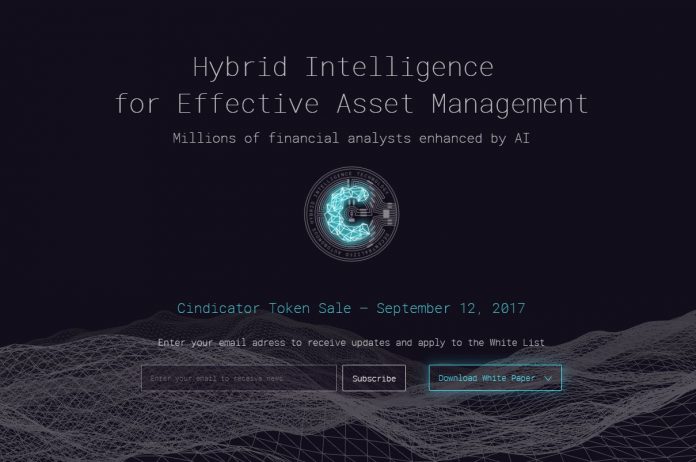 Developer of Hybrid Intelligence platform, Cindicator uses millions of decentralized predictions from non-professional analysts and machine learning algorithms to provide hedge funds and institutional investors with precise forecasts. In a recent pilot project using a Stock Exchange, the team says their platform was able to drive an estimated 47 per cent yield per annum for experimental investment portfolio compared to top Hedge Fund.

“Financial markets depend on predicting future. At what price and when to buy Facebook shares, Brent crude oil, the US dollar, or Bitcoin? In 2015, traders spent over $50 billion on financial market data, with $4 billion spent on predictive analytics. By 2020 this figure will increase approximately 6x. Combining crowd intelligence with machine learning, Hybrid Intelligence can provide the market with unprecedented forecasting accuracy,” said Mike Brusov, CEO of Cindicator.

A pool of 863 independent non-professional analysts predicted price points for four futures daily. Based on answers to 56 questions, the platform powered around 100 deals, more than 80 per cent of which turned out profitable. In 15 days, a model portfolio increased by 2.81 per cent in value which equals a 47 per cent yield per annum. Interestingly, if the robot considered only the forecasts by the most accurate analyst, the profit would have been twice lower.

The new funding will be used to accelerate the Hybrid Intelligence platform development and to create a new business model. To power the new model, the company will release CND tokens providing access to Cindicator’s indexes, data, services, indicators, information, and analytical products.

CND token pre-sale is scheduled to run from September 12, 2017, until October 12, 2017. During this time, 100 per cent of CND tokens will be issued on Ethereum Blockchain by ERC20 token standard. CND tokens will be priced at $0.01 fiat price equivalent, purchase methods accepted include BTC, ETH, ETC, and LTC. The company aims to raise up to $15M during the ICO.

CND tokens will be placed on exchanges, giving an opportunity to openly buy them, gain access to new products, or sell them to traders, analysts, or investment funds. Tokens cannot be sold to residents of the United States, Singapore, or other countries where the sale may require registration as a security.

Each CND token holder can obtain a different level of access to Cindicator’s indicators, indexes, data, services, information, and analytical products. The level will depend on the quantity of tokens in each holder’s possession which in turn will be influenced by each holder’s role in the decentralized ecosystem.

“By issuing CND infrastructure tokens we provide the community a new tool for accessing predictive financial forecasting. It allows us to ensure that the next step is taken towards utilizing all products and capacities of Hybrid Intelligence and creating infrastructure needed to make effective decisions under volatile conditions of the new economy,” says Artem Baranov, COO of Cindicator.

To learn more about CND token sale, read their whitepaper.