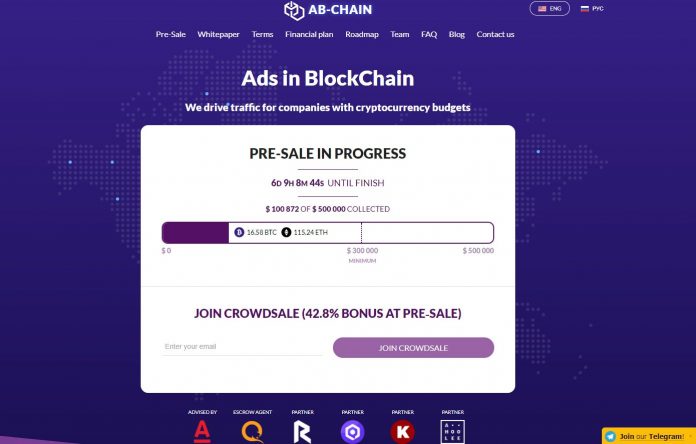 AB-CHAIN is a new generation advertising network that allows advertisers to buy ad space from publishers using cryptocurrencies including a new currency called the ABC token.

AB-CHAIN will provide companies that have raised money through ICOs with an ad network where they can buy online advertising using multiple types of cryptocurrencies and without the need to convert them to fiat. This avoids problems such as low liquidity in crypto market causing the value to fall when converted and local governments charges taxes over conversion of cryptocurrencies to fiat.

According to CEO and Co-Founder Vladimir Dyakov:

“Presently, traditional publishers sell about 50-70 per cent of their media volume, while the rest remains unsold, therefore they are forced to offer big discounts just to sell the remainder. The use of cryptocurrency will significantly boost their profits, and advertisers will be able to choose among the variety of different publishers. Traditional advertising networks will profit from our business significantly improving their sales potential by attracting new clients from the ICO”.

The ABC token is designed as a decentralized ERC20 token on the Ethereum Blockchain. This allows a smart contract between AB-CHAIN and their clients. The smart contract is a piece of decentralised software and infrastructure that allows their customers to interact with AB-CHAIN by known rules that cannot be changed.

When a transaction with ABC coin occurs, AB-CHAIN takes a commission of 10 per cent .

Out of that, 50 per cent is burned and the other half is used to make the AB-CHAIN Blockchain work. Burning a fraction of ABCs is a way to provide long term added value benefits to early token buyer.

AB-CHAIN provides a solution for existing ad networks to increase their sales. Technologically it will be RESTful API, including:

Their advertising rotation system is a cloud-based application scaling, depending on the load of the network. This allows the system to scale for a big volume of advertising without changing the software.

AB-CHAIN is currently  preparing a crowdfunding ICO to raise funding for the purpose of conquering the specific market niche of advertising in cryptocurrency for post ICO companies. The Pre-ICO is taking place for another week, from September until October 1st 2017. Find out more on their website or by reading their whitepaper.