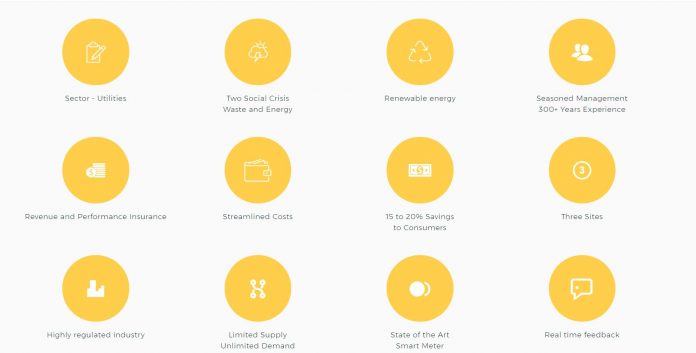 A British company, 4NEW has announced a scalable solution to the enormous and complex problem faced both in the UK and globally. 4NEW will operate using a four stage model – 1) waste collection, 2) waste management, 3) energy production and 4) energy distribution.

In its upcoming financing campaign, 4NEW aims to sell a portion of its future services – whereby it will, in the future, deliver energy converted from waste – at a discounted valuation to its early adopters. 4NEW will build three waste to energy treatment facilities in 2018, and is projected to be operational by 2019.

4NEW is offering consumers the first chance to receive 4NEW coins, in return for Ethereum, Bitcoin, Litecoin or any fiat currency contributions.

Pre-sale registration can be made at: https://4new.co.uk/register

With minimal competition in the Waste to Energy sector in the United Kingdom, 4NEW is optimistic of gaining significant market share in a relatively short period of time.

4NEW says they will own and operate waste to energy treatment plants – having already identified three sites, in Sheffield, Hertfordshire and Newcastle. The installation of the waste to energy plant on all three sites is projected to begin in the second quarter of 2018.

The Blockchain platform will be built on top of the underlying treatment infrastructure covering the entire supply chain from collection of waste to generation of electricity to sale of energy units to the national grid in the United Kingdom. The waste recycling and waste to energy plant processing market worth is worth in excess of £100 Billion annually – an enormous opportunity.

For more information about each stage of the company’s offering and the scale of the issues and opportunity, please read https://4new.co.uk/4new_whitepaper.pdf

4NEW’s business model is geared towards driving costs down for the end consumers, reducing the waste surplus and reducing the energy shortfalls prevalent within the country. Over time, as the 4NEW coin increases in value to be at par with market rates for energy prices, consumers will be able to trade these coins in for their routine energy needs, or trade it through crypto exchanges.

“We are at the beginning of a revolution. A revolution that can, at no additional cost to the consumer, turn the tide on the impending energy crisis, further exacerbated by the plan to ban the sale of all non-electric cars by 2040, and a waste surplus that shows no sign of otherwise slowing down.

“With our plan, we believe that economies of scale of unfathomable proportions can and will be unlocked. Not only do we stand to make a huge and scalable dent in one of the gravest social and environmental issues of our time, but we’re confident in the future of 4NEW Coins and the Smart Meter ecosystem we’re building. Our ICO is both socially and financially grounded.”

Globally, there is a severe surplus of waste. There is also a severe shortfall of energy.

By 2019, it is projected that all landfills in the UK will be at capacity, with no new sites being built.*

The UK is facing an unprecedented ‘energy gap’ in a decade’s time**. With demand for electricity likely to outstrip supply by more than 40%, widespread blackouts are within the realm of possibility.