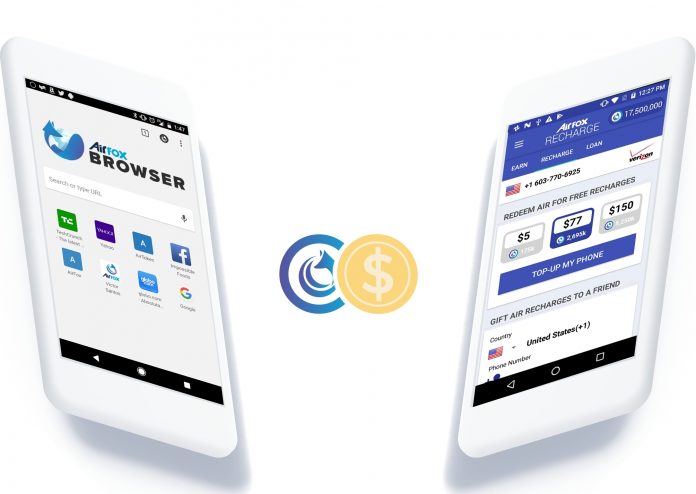 AirFox, the company making mobile internet more affordable for millions of people, today announced it reached its $15 million funding goal and closed its public ICO. AirFox saw an outpouring of support in the weeks leading up to its ICO, raising $6.5 million in an impressive ICO pre-sale, and later more than $8.5 million in the public sale. In the midst of a volatile ICO market often plagued by scams and illegitimacy, AirFox stitched together a unique framework of regulations and processes in order to effectively self-regulate. More than 2,500 legitimate backers successfully contributed to fund the development of AirFox’s new blockchain consumer platform, AirToken (AIR), and its revolutionary microloans programme.

The AirToken blockchain unlocks mobile access by connecting mobile airtime sponsors (advertisers and lenders) to prepaid mobile subscribers in emerging markets. AirFox’s free Browser app enables prepaid mobile customers to earn AirTokens that can be converted into mobile airtime. Users establish credit history by opting to share their device data and advertising behavior, enabling anyone with a smartphone to apply for and receive microloans in AirTokens.

By unlocking emerging markets’ dead mobile capital, the AIR project aims to provide the underserved masses with greater access to capital and affordable mobile internet. AirFox made a concerted effort to attract a large group of diverse backers committed to its mission in order to ensure the continued success of the AirToken. AIR is truly a utility token funded by the people, for the people.

“Emerging markets rely on smartphones not only as a form of connectivity, but also as the primary method of banking for most of the prepaid population,” said Amy Spurling, ex-COO & CFO of Jana and current AirFox advisor. “AirFox is going beyond just raising money; it is demonstrating at its core the power of blockchain technology and its ability help those around the world gain access to information and banking.”

“We look forward to developing AIR to its fullest extent in order to enable a new blockchain-based mobile ecosystem in the developing world,” said Victor Santos, AirFox’s Co-Founder and CEO. “Almost half of the world’s population is unable to access the internet and another 2 billion are excluded from financial and banking systems due to poor infrastructure, archaic systems and high costs. This means much of the developing world is deprived of the educational, commercial, and social benefits associated with capital and mobile access. The AirToken system provides greater access to capital at cheaper rates, expands access to mobile capital through prepaid wireless accounts, and improves the lives of those in the underserved, lower socioeconomic classes.”

In the developing world, mobile airtime (or data) functions as a currency. The success of mobile phone-based money transfer services like M-Pesa highlights the need for banking options that fit the unique needs of users in emerging markets. By incorporating blockchain technology into mobile phone-based money transferring, AirFox is adding a level of financing, security and reliability previously unachievable. Using AirFox’s Android application, thousands of quantifiable data points can be tracked and analyzed to create accurate ‘credit scores.’ These credit scores will segment users into tranches, allowing lenders and advertisers to sponsor AirTokens through an Ethereum smart-contract. Read more about how AirFox plans to turn AIR into the token of mobile internet access here.