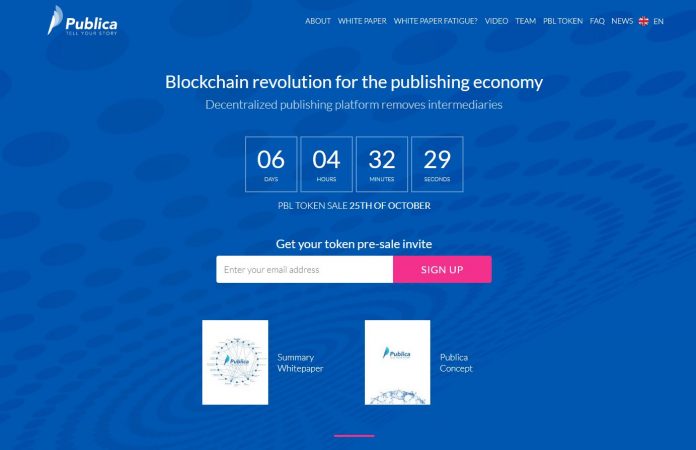 Publica is building a new ecommerce platform for the publishing ecosystem using the Ethereum Blockchain and smart contracts.

“Blockchain will go down in history as one of the most disruptive technologies of all time,” said Kenigsberg. “Publica’s vision to unite it with printing and the internet, two of humanity’s most disruptive inventions, is brilliant and perfectly timed for this revolution in human history. The Publica platform is going to enable a lot of positive change for many people around the world.”

Publica’s ereader apps, for all common platforms, will do double-duty as digital wallets to make their adoption easy and transparent for the public. The platform is designed to bring the Blockchain revolution to how books are funded, made, publicized, discovered, bought, and read.

Publica will work with Ethereum, standards bodies, and other authorities to extend the Blockchain into publishing. Publica will also support Blockchains in the long tail of publishing derivatives such as movie scripts, games, merchandise, audio books, and periodicals, with the requisite legal frameworks.

“The publishing ecosystem is really a global economy of ecommerce unto itself. Book projects are like startups. They can start small and they can grow into sustainable businesses. Entrepreneurial business models and ideas will become the new norm.”

The Ethereum Blockchain plays three roles on the platform, supporting READ, RIGHTS, and PBL tokens. When a book is funded, whether by crowd pre-sales or institutions or by any other means, Publica will write the terms in smart contracts called Book ICO’s. READ tokens are one of the two keys in a public-key / private-key decryption system for reading a book’s digital editions.

When a book’s contents are extended to derivative rights, Publica will write their terms in smart contracts called RIGHTS ICO’s. “We’ll do our best to help the Blockchains get ready for RIGHTS tokens,” said Publica’s CTO Yuri Pimenov.

Publica will issue one billion tokens called PBL, or Pebbles, in an October ICO. According to Marc:

“The publishing economy needs its own digital money because it’s a very long-tail business. Book projects and their contracts outlive people, as do copyrights. Project funds don’t need daily exchanges with local fiat currencies. They’re ‘work money’ with long-running balances. The gig economy and sharing economy are global and they should come into the publishing economy. No local currency should pose a barrier to entry.”

Pebbles will be invisible to the general public. Coin and token exchanges make it simple to present ecommerce in any denomination. Pebbles will be the medium of exchange within the platform’s smart contracts for goods and services. “Publishing’s ecommerce needs mega payments, micropayments, and every size in between. Pebbles are better suited for it than BTC, ETH, READ and RIGHTS tokens, or dollars for that matter,” said Publica’s COO Antons Sapriko.