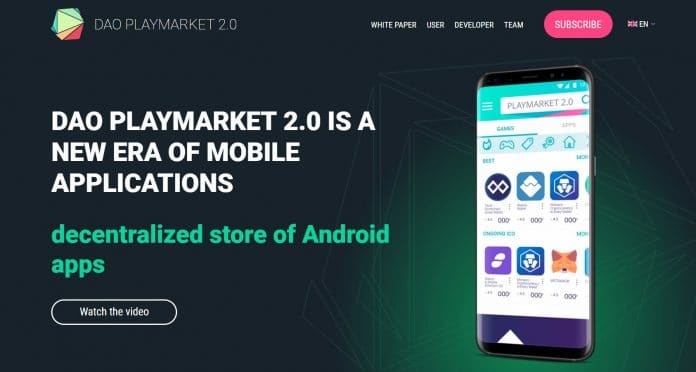 DAO PlayMarket 2.0 is a decentralized Android App Store that accepts payments in cryptocurrency and is combined with an ICO platform for developers.

The Token Sale, which starts on November 8, has already raised $ 350,000 in a closed round of funding. The partners of the DAO PlayMarket 2.0 were the Cyber Russia and BitBaza. All funds, including those collected in the course of the IСO, will go to implement the marketing  plan.

After the platform launch, more than 500 Android applications will be available on the platform.

DAO Playmarket 2.0 will allow developers to attract additional funding into their projects, and users will have worldwide access to applications resistant to blocking. App developers have the opportunity to issue their own app tokens on the DAO PlayMarket 2.0. The platform fee is 5% of these tokens, which automatically will be moved to the PlayMarket Fund (PMF). Thus, PMF will be constantly replenished with tokens, issued on the platform, and bring dividends to members of the DAO PlayMarket 2.0.

The main functions of the fund include open management of the fund’s resources in conjunction with other members of the DAO PlayMarket 2.0.

The revenue from the fund will be distributed among PMT owners in accordance with their token shares.

The platform already cooperates with 185 development teams and has more than a million contacts with individual developers. The internal currency of the platform is the PMT token. Owners of these tokens will be able to either exchange them on the platform-based crypto-exchange or to store them in order to receive dividend income. App developers will be able to release their apps’ token-shares and distribute them among current shareholders.

More info can be found on our website and Telegram channel.