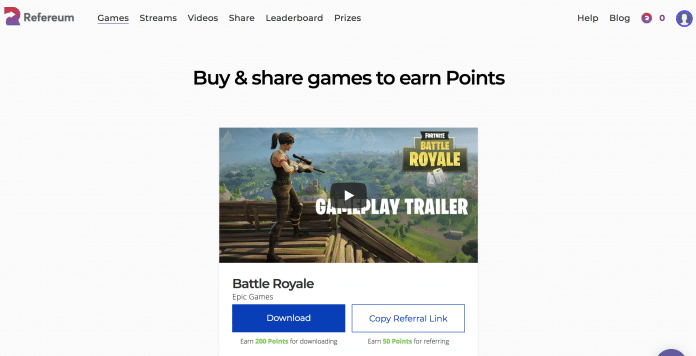 Refereum’s initial coin offering (ICO) is that rare thing: A utility token marketed to actual users, rather than investors. On Refereum’s website, the first thing visitors are asked to do is to download a game and earn some tokens. I like a project where the developers are focused on generating network value.

It doesn’t hurt that it’s a red hot space (streaming video games) and Refereum has great endorsements (Twitch & Unity). They also have a good story: as the model for video games has changed rapidly, marketers have gotten a little desperate. Video game marketing’s middlemen are out of control; game developers and game streamers need a decentralized way to help each other.

As always, Token Report does not provide investment advice, but here is our analysis of Refereum, our momentum pick among this week’s ICOs.

Prediction: Refereum will have a hard time luring top-tier game streamers off incumbent platforms, where they have access to large audiences and deep-pocketed advertisers. Removing the middleman’s cut is not a convincing argument at this scale.

Jones and co. undoubtedly know this. That’s likely why they are focused on game streamers who “have a following,” but are “certainly not in the top 1% of streamers”; and indie developers who “have spent their savings creating an awesome new game,” according to the use cases outlined in the Refereum white paper.

Indie game developers and mid-tier streamers may be an interesting niche, but do they form a USD 50 million economy? That’s the value of Refereum’s total supply of 5 billion tokens at its ICO price of 0.01 USD per token.

The global ad spend on video game marketing is nowhere near the USD 37 billion cited (with a bogus footnote) in Refereum’s white paper. Statista puts the 2017 number at 3.6 billion. (37 billion, for context, is the total ad spend against all streaming video, projected for 2022 by Juniper Research.)

Still, if Refereum captures less than 5 percent of the video game ad market, it may be enough to justify their ICO price.

Of course, there are other decentralized projects competing for a share of streaming games, like DLive. Earn.com, LBRY and Steemit are all potential decentralized streaming game competitors. And the array of incumbents in game streaming only grows larger and longer as giants like YouTube make inroads.

But at this stage, I would worry less about competitors for the niche game streaming market, and more about whether Refereum’s token, /RFR, is set up to capture any of its value. Refereum’s token mechanics are purely transactional: There’s no holding or staking involved. As always, it stands to reason most participants will prefer to quickly convert their highly illiquid RFR into a more liquid currency, like BTC or USD.

The better upside potential is in an acquisition by Twitch: Refereum has touted their relationship with the Amazon-owned game streaming giant. That should both encourage the RFR token holder and give her pause. Refereum touts 25,000 signups in its first few days of operation. Twitch, with over 100 million monthly active users, is an order of magnitude above even the aspirations of a niche service like Refereum.

No doubt Refereum’s friends at Twitch see the potential in the elegant, blockchain-based solution Refereum has designed. But how would that solution need to be adapted, in order to serve Twitch’s needs? And what would those adaptations do to the value of the token? As always, there are no guarantees.

Token Report is an independent financial information service founded by Galen Moore and Peter Vessenes. Galen is a financial journalist with a background in startups, venture capital and launching news sites. Peter is a co-founder of the Bitcoin Foundation, and launched the first VC-backed Bitcoin company in 2011. He is managing director at New Alchemy, a boutique consulting and investment group based in Seattle, Wash., that is making a pre-seed investment in Token Report.​

Nothing contained in Token Report materials or posted at tokenreport.com constitutes an offer or a solicitation of an offer to buy or sell a security, financial instrument, or other category of asset, or investment advice or recommendation of a security, financial instrument or other category of asset. Tokens involve risk and are not suitable assets for everyone. Token Report believes its information was obtained from reliable sources but does not guarantee its accuracy or completeness and accepts no liability for losses arising from the publishing of this information. The information provided by Token Report is not a substitute for financial, legal and other professional advice. Each individual should always consult his or her own financial, legal or other professional advisors and discuss the facts and circumstances that apply to the individual.