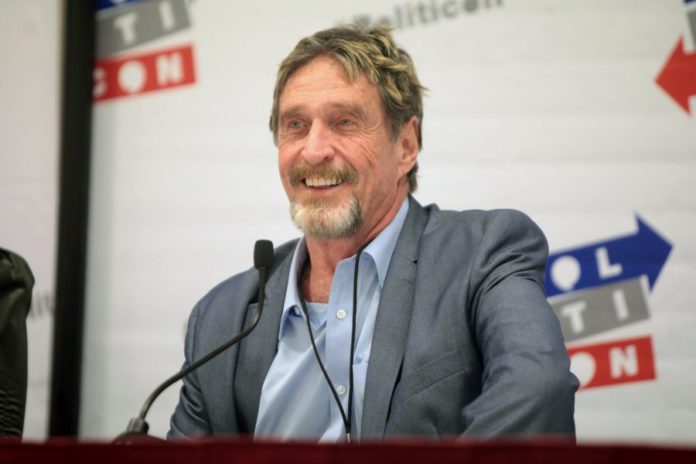 The ‘Godfather of Security’, who has destroyed the FBI in on-air combat, is back causing trouble. Founder of McAfee Antivirus, crypto-shiller McAfee says he is here to protect us from the ‘overreach’ of the SEC but he is no longer working to promote initial coin offerings (ICOs). 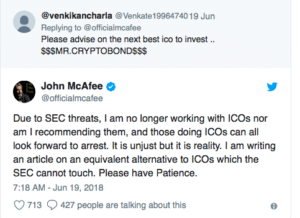 Even though the SEC recently conceded that Ethereum, as it stands, is decentralized enough to not be deemed a security, they have maintained that all ICOs are securities.

In repsonse, McAfee tweeted: “All ICOs are Securities”! I will not now, nor will I ever, accept this as a reality. I am submitting, now, to this law, but I will fight with every last breath to ensure that this absurd overreach by the SEC will not stand!! It will not stand!”

He has recently demanded that SEC Chaiman Jay Clayton debate with him over the securities issue which is confusing investors and crypto companies worldwide. He tweeted the Chairman’s phone number, telling his followers to ‘flood’ his office with demands.

The SEC chairman is Jay Clayton. He can be reached by phone at 202-551-2100 or by email at chairmanoffice@sec.gov

Flood this mother fucker's voice mail and inbox with demands that he debate me. CNN is ready! Show this prick what the crypto community is all about!

He has form in this manner of meddling. In February 2016, McAfee debated former FBI officer Steve Rogers live on CNN over the issue of Apple providing a backdoor into their software. Following the debate, the FBI dropped the case against Apple.

McAfee’s response to alleged threats by the SEC has been to halt all commercial work with initial coin offerings (ICOs), including advertising them through sponsored tweets, known as shilling. He said that he is now writing an article on “an equivalent alternative to ICOs which the SEC cannot touch.”

On Wednesday, a top U.S. Secret Service official asked Congress to consider additional regulation to crack down on cryptocurrencies. Robert Novy, deputy assistant director in the U.S. Secret Service’s Office of Investigations raised his concerns over privacy coins, such as Monero and Zcash, in his written testimony to Congress.

There is a slim chance that McAfee might save the crypto space from heavy-handed regulation. He has announced his intention to run for US President in 2020. However, his inauguration speech may involve him eating his own penis on live television if Bitcoin is not worth USD 1 million by then, as he famously wagered. In fact, you can watch the development of his bet here. Currently, Bitcoin is 40 percent below the price it needs to be to reach the target on time.