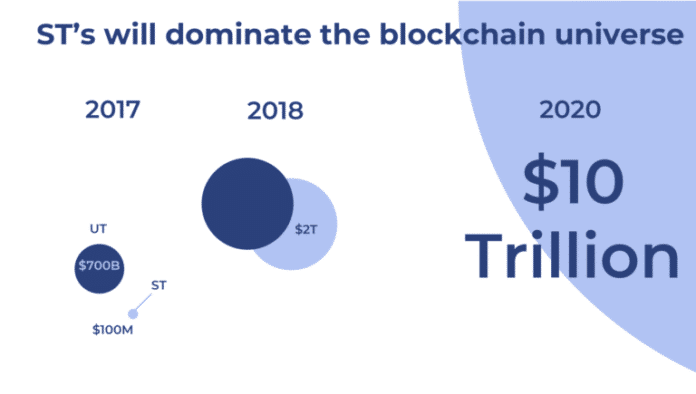 The challenge lies in their unfamiliarity amongst most financial professionals. Despite being a model closer to traditional financial products, adoption and understanding in mainstream finance continues at a slow pace.

While the mainstream has been tentative to adopt security tokens, they have recently gained unparalleled popularity in the cryptocurrency industry. Security tokens, security-type certificates or tokens registered under a legal and regulatory framework, are seen by several key industry players as a more legitimate way to perform ICOs.

However, beyond this, security tokens also have the potential to completely revolutionize global financial practices like securities tokenisation.

For securities trading, the benefits of blockchain boil down to three key areas: circulation and liquidity, versatility and security and the securitisation of new assets.

The current structure of the securities market means that cross-border transactions are limited to a few exchanges only, and can often be slow and costly – trade reconciliation work has to be done manually, along with other labour intensive database tasks. Token exchanges have the potential to solve this – they now operate 24 hours, 365 days a year, trading is relatively liquid and transactions are settled in the same working day with no clearing period, otherwise known as ‘T+0’.

Furthermore, these tokens can be traded in Satoshi units, which have nine decimal places – enabling smaller trades to be done and lowering the investment threshold, meaning more people can invest than ever before.

Should we apply this technology to the securities market, it would have the potential to solve the circulation and liquidity problem, as well as making transactions easier by removing cross-border restrictions.

Industry adoption of security tokens could also provide some strengths when it comes to versatility, as they can have a high degree of interoperability. By tokenizing any form of asset, you open it up to be traded for a much wider range of things, like security tokens, utility tokens or digital currencies, rather than just another security token.

The decentralized ledger system also means that it would be more difficult to hack compared to a centralized server system, making ownership of the tokens more secure.

In addition, security tokens offer more security than other cryptocurrencies, as everything is linked to the individual’s ownership. For Bitcoin, if you are a victim of a hacked account or someone gets hold of your private keys, the Bitcoins in question would most likely be gone and the chances of you proving ownership of the Bitcoins are slim.

However, due to a tangible underlying asset, security token hacks take a different form. While hacks could lead ownership to be debatable, the asset in question will still be there. And as long as the company issuing the security tokens has been through sufficient Know Your Customer (KYC) checks, ownership can be resolved. Furthermore, stealing a security token from someone would leave a transaction record on the blockchain, which is the digital equivalent of leaving your fingerprints all over the crime scene.

Tokens are unique in that that they can securitize various forms of assets including both tangible and intangible assets. This has already had some success, with the recent auction of Andy Warhol’s 14 Small Electric Chairs, an iconic contemporary art piece featuring an electric chair, allowing art lovers to buy a share in the painting.

This would also contribute to liquidity and interoperability of assets, as these small units can subsequently be traded. This goes beyond art – in the future we can expect to see assets like office buildings operating on a fractionalized ownership model, allowing smaller investors who previously would not be able to afford investment in this asset class to participate.

A ‘super’ future for securities?

As a result, not only do securities tokens provide a safer and more sustainable alternative to the ICO model, but they also have the potential to revolutionize the traditional securities market, possibly opening up the idea of ‘super securities’ further down the line.

Through blockchain technology, securities can be made more accessible, liquid, and secure by removing third-party risk and lowering transaction costs. Should the trend continue, we could see security tokens becoming standard practice, eventually replacing existing securities to become ‘super securities’.

With this in mind, those who herald security tokens as third wave in Fintech may well be right, particularly when it comes to revolutionizing securities trading. However, how we approach this next technological step is crucial. If implemented correctly, security tokens could significantly improve existing processes and make investment accessible to all, bringing positive change not only for the future of cryptocurrencies, but also for the wider financial markets.