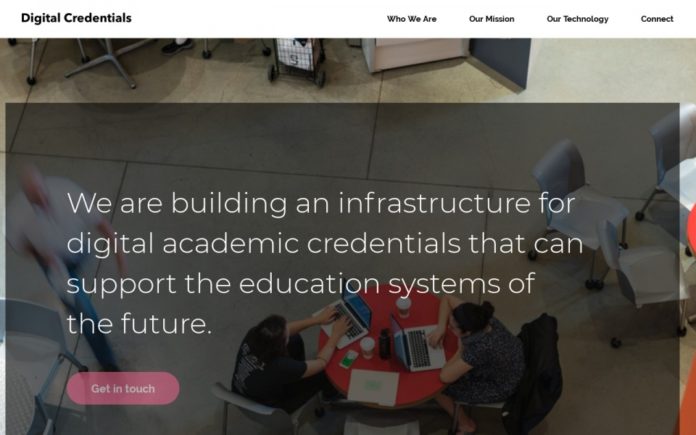 Nine major universities from across the globe have formed a group called Digital Credentials, in order to create a trusted, distributed, and shared infrastructure standard for issuing, storing, displaying, and verifying academic credentials.

“Currently, those who successfully complete a degree from an institution must go back to that institution — sometimes by mail or even in person — each time there is a need to verify the academic credentials earned,” said Sanjay Sarma, MIT vice president for open learning. “This can be a complicated problem, especially if the learner no longer has access to the university. Such is the case with many refugees, immigrants, and displaced populations.”

“As teaching and learning offered by our universities has come to encompass digital platforms and as each of our learners have gained the power to shape their own educational trajectory over a lifetime, the question of trusted verification and authentication of learning and credentials poses itself with broad urgency,” said Diana Wu, dean of university extension and new academic ventures at University of California, Berkeley.

Using technology that relies on strong cryptography to prevent tampering and fraud, and shared ledgers to create a global infrastructure for anchoring academic achievements, the researchers plan to build upon earlier research and pioneering efforts by their institutions — including MIT’s pilot program for issuing all of its graduates a digital version of their diploma that is verified against a blockchain.

One of the driving forces behind this shared effort is the interest by universities to utilize the advances brought by these new technologies in a way that prioritizes the needs of learners. Digital credentials allow learners to maintain a compelling and verifiable digital record of their lifelong learning achievements that may include badges, internships, bootcamps, certificates, MicroMasters and stackable combinations, as well as traditional degrees — all of which they can easily share with employers or other institutions. Institutions can record and manage the achievements of their learners in a way that is easy, safe, and inexpensive, and minimizes the risk of identity fraud.

“We are well positioned in academia to use cutting-edge technology to empower learners to advance their careers and education with credentials in the palms of their hands,” said Hans Pongratz, senior vice president for IT-systems and services at Technical University of Munich (TUM).

The team has now set its sights on the evolution and governance of a shared standard. “Digital credentials are like tokens of social and human capital and hold tremendous value for the individual. The crucial opportunity we have today is to bring together institutions that share a commitment to the benefit of learners, and who can act as stewards of this infrastructure,” said Philipp Schmidt, director of learning innovation at the MIT Media Lab.

p style=”padding-left: 40px;”>”Our shared vision is one where academic achievements, and the corresponding credentials that verify them, can open up new pathways for individuals to become who they want to be in the future,” said José Escamilla, director of TecLabs Learning Reimagined at Tecnologico de Monterrey.