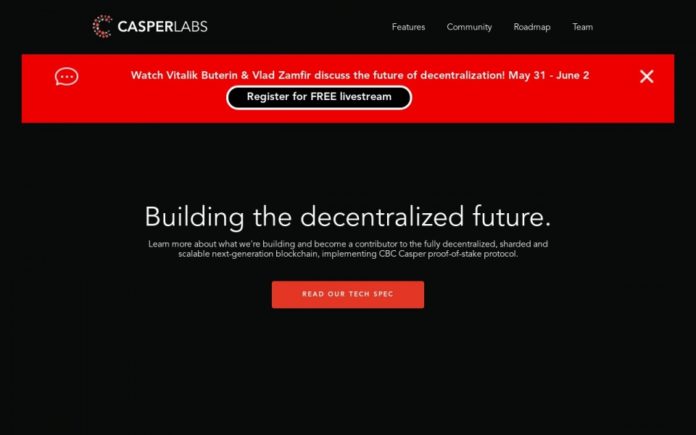 CasperLabs, a blockchain-oriented Research and Development (R&D) startup, is pleased to announce the partnership with Canadian non-profit organization CryptoChicks. Cryptochicks Hackathon + Blockchain, AI Conference is held in Toronto from May 31 to June 2.

The collaboration will see CasperLabs acting as the main sponsor and co-host of the event. The conference and hackathon will be attended by over 1,000 guests. Top speakers, developers and exhibitors operating in the blockchain and AI space have already confirmed their presence.

The highlight of the event is a panel titled “Scaling Web 3.0 – The First Billion Users of Blockchain,” which will host Vitalik Buterin, co-founder of Ethereum, and Vlad Zamfir, Lead CBC Casper Architect. The panel, moderated by CasperLabs co-founder Steve Nerayoff, will touch upon the future of blockchain, its scalability, and the adoption of the Correct-by-Construction (CBC) Casper Proof-of-Stake (PoS) protocol. The later is a version of PoS consensus mechanism that is going to be implemented by both Ethereum and CasperLabs’ blockchain networks.

Interestingly, CryptoChicks co-founder Natalia Ameline happens to be the mother of Vitalik Buterin. In light of this, the hackathon has evident aspects of a family conference. Coincidence or not, the event is overlapping Children’s Day, which is celebrated on June 1 by almost 50 countries around the world. On top of that, the United Nations (UN) proclaimed June 1 to be the Global Day of Parents “to appreciate all parents in all parts of the world for their selfless commitment to children and their lifelong sacrifice towards nurturing this relationship.” This context is nourishing the atmosphere of the hackathon as a family event, in which Mrs. Ameline and her son Vitalik Buterin will be in the spotlight.

The panel hosting Vlad Zamfir and Vitalik Buterin will focus on the CBC Casper PoS consensus mechanism, which is promoted by CasperLabs and the Ethereum Foundation. CasperLabs is working on its own blockchain that will rely on a version of CBC Casper PoS protocol. Elsewhere, Ethereum network is about to replace its PoW algorithm with the new Casper technology as well.

Some of the CasperLabs team members, including Zamfir himself, are closely associated with the Ethereum Foundation. That’s why both blockchain teams came to the conclusion that CBC Casper would transform how the distributed ledger technology (DLT) works.

CasperLabs developers consider that PoS is the ideal consensus protocol to achieve scalability, which is why the startup is building its blockchain network around its proprietary consensus method called Correct-by-Construction (CBC) Casper Proof-of-Stake.

According to Vlad Zamfir:

“The technology promises to scale the blockchain without sacrificing decentralization through proof of stake consensus. By removing the mining required by traditional Proof of Work protocols, it will be more ecologically and economically efficient and secure than pre-existing systems.”

When asked in an interview whether the startup would be ready to further collaborate with Ethereum and other projects, CasperLabs co-founder Mrinal Manohar (who is also CEO of ADAPtive holdings) said:

“Linux is pretty great because in spite of the myriad forks, directionally there was a focus to create something great and collaborate, rather than focus on petty competition or palace intrigue. Ethereum was a genius tectonic shift not since replicated in our industry and a lot of us at CasperLabs have been seed investors and supporters of that project since its inception. Our entire code repository on Github is open source and available to everyone. If there is any part of our build that is useful to Ethereum or any project that supports the open source and decentralization ethos, we’d love to share. This is an open invitation. CBC-Casper is an important and evocative technology which needs to be implemented”.

For those who want to find out more about CBC Casper, the conference will be live streaming the event.