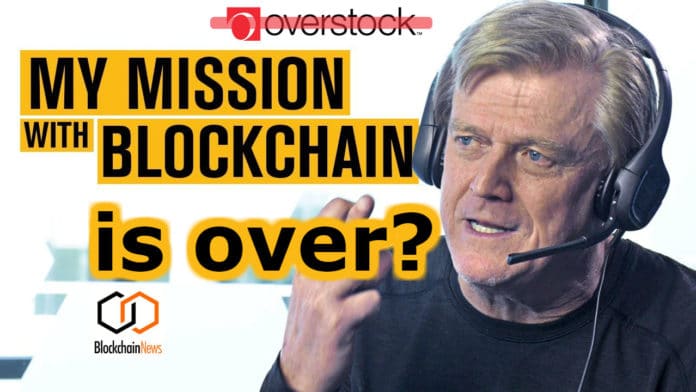 Overstock CEO Partick Byrne quit Overstock Thursday after making controversial comments about his role in the “deep state.” The founder of Overstock 20 years ago, Byrne, has been facing heavy criticism since he responded to claims of his involvement in the federal government’s investigation into the 2016 election which caused shares of Overstock.com to crash 36 percent last week after Byrne said had been assisting federal authorities for years.

Disclosing he was romantically involved with Maria Butina, the Russian operative who used her NRA activism to infiltrate American politics in an interview with The New York Times didn’t help. She was later sentenced to 18 months in prison.

The CEO’s resignation comes on the tail of some conspiratorial comments he recently made, confessing his role in the ‘deep state’, claiming that he was partly guilty for:

“…damage done to our nation for three years and felt my duty as a citizen precluded me from staying silent any longer.”

“Byrne released an initial statement last week where he discussed his involvement in the federal government’s investigation into the 2016 election interference, though he wasn’t super-specific, he said he assisted in ‘investigations’ related to the Clintons and Russia.”

Byrne appeared on Fox Business Network with David Asman, revealing his claims about the Clinton investigation.

“I ended up in the center of the Russian and the Clinton investigations,” said Byrne.

“I have all the answers. I have been sitting on them waiting for America to get there. Last summer I figured out… what they all are is all about political espionage. It had nothing to do with law enforcement, it was all political espionage. Here’s the bottom line. There is a deep state like a submarine lurking just beneath the waves of the periscope depth watching our shipping lanes. And a nuclear ice breaker called the USS Bill Barr has snuck up on them and is about to ram midship.”

“That’s about to happen and I think we’re about to see the biggest scandal in American history as a result. But it was all political. Everything you think you know about Russia and Clinton investigations is a lie,” Byrne told Atman.

“It’s all a cover-up. It was all political espionage.”

From his resignation letter:

“In July I came forward to a small set of journalists regarding my involvement in certain government matters. Doing so was not my first choice, but I was reminded of the damage done to our nation for three years and felt my duty as a citizen precluded me from staying silent any longer. So, I came forward in as carefully and well-managed fashion as I could. The news that I shared is bubbling (however haphazardly) into the public.”

“Though patriotic Americans are writing me in support, my presence may affect and complicate all manner of business relationships, from insurability to strategic discussions regarding our retail business. Thus, while I believe that I did what was necessary for the good of the country, for the good of the firm, I am in the sad position of having to sever ties with Overstock, both as CEO and board member, effective Thursday, August 22, 2019.”

“I think the blockchain revolution will reshape key social institutions. We have designed and breathed life into perhaps the most significant blockchain keiretsu in the world, a network of blockchain firms seeking to revolutionize identity, land governance (= rule of law = potential = capital), central banking, capital markets, supply chains, and voting. In three of those fields (land governance, central banking, and capital markets) the word “trillions” comes up when calculating the disruptive opportunity of blockchain. In those three fields, our blockchain progeny (Medici Land Governance, Bitt, and tZERO, respectively) are arguably the leading blockchain disruptors in existence.”

“In his twenty years as Overstock’s leader, Patrick’s vision for Overstock as an innovation leader has come to fruition. It will be my mission as I take the helm to continue and build on Overstock’s achievements and success,” said Johnson. “I am confident Overstock’s future – both in retail and blockchain – is bright.”

“Dr. Byrne has successfully created and moulded Overstock over the years by pioneering the marriage of tried-and-proven competitive business principles with cutting edge data analytics and technology; a true visionary,” said Aryafar. “I am excited to join the Board and I look forward to continuing the company’s trajectory and contributing to its future success.”

“Jonathan’s diverse and extensive experience here has prepared him well to successfully oversee both our retail and blockchain businesses,” said Byrne. “Kamelia is a brilliant machine learning scientist and ecommerce veteran who has already made great contributions to our science, engineering, and analytics by advancing data-driven technology. Her addition to the Board will continue to propel Overstock forward in its visionary direction.”

“We respect and understand Patrick’s reasons for resigning and acknowledge his momentous achievement in taking Overstock from a startup twenty years ago to one of the nation’s leading online retailers and positioning it at the forefront of the blockchain revolution,” said Abraham. “We have full confidence in both Jonathan’s ability to lead the company, and Kamelia’s expertise and insights to help the Board successfully lead Overstock into the coming months and years.”

Shares of Overstock drove upwards as high as 17 percent after the resignation news but settled to about a 10 percent lift in the afternoon.