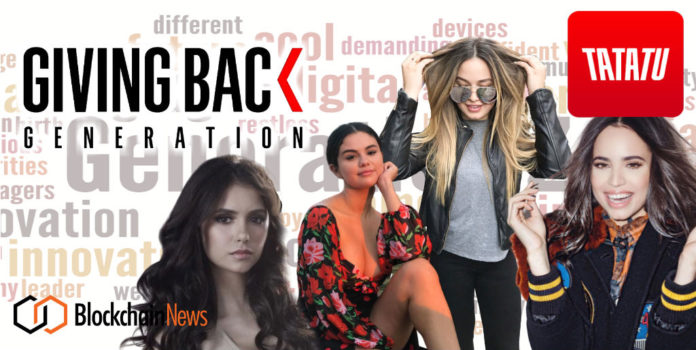 Blockchain fueled tokenized entertainment community Tatatu, has launched a new show starring Selena Gomez, Nina Dobrev, Sofia Carson and Paulina Char who have signed on for a new social awareness series “Giving Back Generation,” hosted by Raquelle Stevens, which debuted exclusively on the platform on September 23, 2019.

The video podcast series plans to have its guest discuss important issues and lessons that young adults are facing today such as feeling empowered within their communities, maintaining a positive mindset and paying it forward. “Giving Back Generation”, is an inspiring Vodcast that aims to incentivize newer generations to give back “one good deed at a time” via deep and personal conversations, young and successful artists, entrepreneurs, actors and singers share touching and personal experiences on how they give back and create social impact.

The series was brought forth is the result of a collaboration between producer Andrea Iervolino, director Chiara Tilesi and host Raquelle Stevens because they wanted a way to reach out to young adults who are struggling with finding their place in the world and would like to make a positive impact.

The Hollywood actor Johnny Depp announced in October 2018, he was planning to make a film on the TTU platform and has formed a partnership to develop and produce film and digital content together with Tatatu through his Infinitum Nihil production company. The film was recently released at the Venice Film Festival.

Tatatu raised $575 million USD in a massive private token sale (the third-largest token sale on record after EOS and Telegram) at the tail end of Crypto Winter in summer 2018. There has been controversy and problems with the platform with a massive firing of half the core team in early 2019, including senior roles such as the Chief Technology Officer (CTO) and the Head of Platform.