The next-generation, open-source blockchain for building decentralized applications- Æternity is collaborating with the Uruguay Digital Party to optimize the participation processes of the party members through the use of blockchain technology in internal voting.

In an exclusive interview, CEO of Æternity Americas Pablo Coirolo told Blockchain News that Æternity protocol will be able to verify voters and allow for anonymity.

“This is a governance app which allows party members to vote internally on party policy, stated Coirolo. “We separate identity from the vote on Blockchain.” 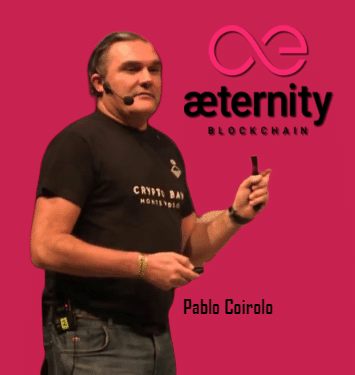 Coirolo, born in Uruguay and raised in the USA, is a former Agricultural Engineer with an MBA who went on to head Telefonica in Uruguay, before entering the high finance world of M&As. In 2014, when he discovered bitcoin and blockchain he was hooked.

While building the CIE ORT Aeternity Centre for Innovation in Blockchain at ORT University of Uruguay, he was introduced to the political leaders of the Digital Party of Uruguay who jumped on board.

“The application of democratic governance that will be implemented by the Digital Party is based on the internal governance solution that Æternity uses for internal community decision-making, which is a completely new architecture, allowing greater participation of citizens in political decisions at all levels, with unalterable reliability,” added Coirolo.

“This is an important milestone on the road to the massive use of blockchain technology to benefit democratic institutions.”

This allows for both transparency and credibility – as well as honest voting without repercussion which will allow members of the Digital Party to participate in the political decisions of their community in a decentralized manner. Uruguay’s stable and forward-looking politicians, strong IT sector and openness to financial innovation and foreign investment and ideas makes it ripe for blockchain to enter the political realm.

In this way, each citizen can vote on proposals and give ideas directly and safely, thanks to encryption techniques that ensure a verifiable process separating the identity of the vote, which is kept secret.

Started in 2013, the Digital Party’s representatives affirm that it is the first political party focused on bringing the digital era to the political sphere of Uruguay. It is defined as a group of people who believe that each Uruguayan must audit their representatives and take advantage of technology to expand citizen influence.

“We want to put technology at the service of Uruguayans to add participation and transparency to decision making. We believe that the benefits granted by blockchain in terms of security and decentralization of processes allow us to offer Uruguayans a solution according to our expectations,” said Digital Party President Justin Graside.

Æternity is a public, open-source blockchain protocol that enables a platform for next-generation decentralized applications and high scalability. Its core components are written in the functional programming language Erlang, and its smart contracts are also functional. Unlike other blockchain platforms, the Æternity protocol itself incorporates several essential technological features. Æternity also features SDKs in Javascript, GO, Phyton, Java, as well as a middleware and a development suite that streamlines smart contract development. For more information, please visit https://æternity.com/.