<START TRANSMISSION> Latest evidence that you will be assimilated into a Borg; you may choose which Borg.</STOP TRANSMISSION> 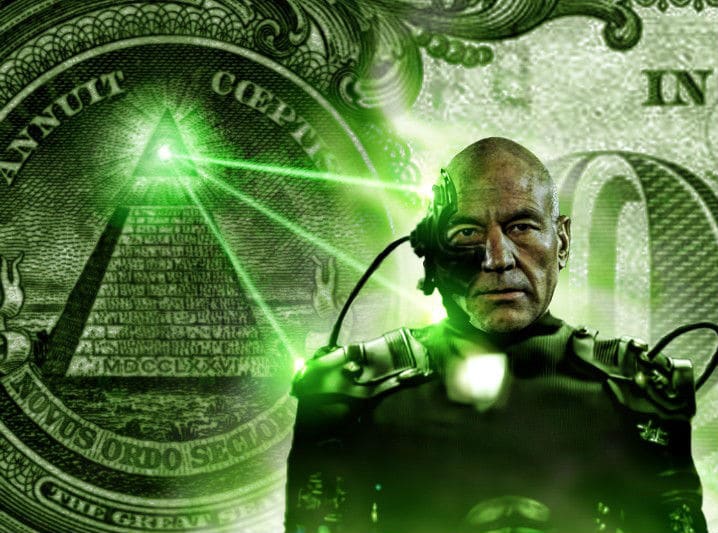 Okay, maybe not literally… but there is a confluence of macro-trends that will make you think twice.

1. What used to be a phone became mobile. It then absorbed other functions while at the same time packing more power into a smaller frame. Later Bluetooth integration provides wireless communication limited only by range. While wearables are not yet prevalent (watches are close), there are some uses, and there are more than a few prototype contact lens user interfaces. I don’t think it a stretch to say that implants that allow web access and extremely fast and personally integrated communications are a relative near-term certainty.1

2. The tension between centralized data storage and operating systems and decentralized consensus algorithms providing for trustless transactions will meet in the middle as a widely distributed global permissioned distributed ledger. Think of it as if Bitmain actually controlled all of the Bitcoin nodes. Would it still be a decentralized system? That said, if notwithstanding single entity control there is appropriate governance, firewalls, etc., can it remain functionally decentralized? Are we headed for a global permissioned intranet of sorts?

Put these factors together and you get data controlled, stored, managed and secured by a global entity with near-immediate and complete access to the thoughts/habits/communications/data of what can only be described as a captive user base. Do you still think you won’t be assimilated? In fairness, it is possible that there will be more than one Borg.

We are closer to a centralized platform than most realize.

A few days ago, Microsoft announced that it will roll out a token minting product through which their customers may issue a variety of types of tokens, covering the range of financial product tokens, Dapp utility tokens and whatever else one can think of. The tokens would be on a permissioned chain modelled after Ethereum, large enough to allow global access and running on servers (you guessed it) composing the Azure cloud. If this doesn’t sound familiar, look back to the beginning of the dot com era when Microsoft sucked up market share from Netscape by giving Internet Explorer away for free. Netscape (with arguably a better product) could not compete against a free product pre-loaded and ready for use.

The old-guard tech companies are already in both consumer and government good graces. You may have noticed that most of the world’s computers still run Microsoft products. Microsoft Office/Exchange/Edge, etc. is still usually the first software loaded onto a new PC or laptop.2 Indeed, Microsoft has been in the user experience business for decades and (frustrating as they may be at times), generally understands how to facilitate at least rudimentary use without much user aggravation. Microsoft is also government-friendly. While Facebook Libra threatens the effectiveness of sovereign governance through economic regulation; Microsoft (IBM and others) of the much older guard appear beyond such dangerous attempts to reshape the world.3 Tokens minted through Microsoft’s service will self-enforce KYC obligations and securities law restrictions. They will be transparent and auditable. In short, they will be everything a government could want in terms of prevention and identification of undesirable transactions… a far cry from Monero, etc.

While I wish it were not the case, the decentralized platforms (Ethereum, Eos, Tezos, Neo, V-chain, etc.) probably play the role of Netscape in this story. In some cases (Ethereum), we have legacy technology that can’t scale to where it needs to be to accomplish a global mission. Notwithstanding a relatively organized foundation and developer community, can we really see it maturing to the point of providing the ease of use and cost benefits of a Microsoft product? Other projects (Eos for instance) are not very far from what Microsoft is offering in any case (21 entities running nodes) and have governance issues to iron out that may prove insurmountable. Even with dedicated ecosystem funding for promising projects, it is hard to picture any of the “crypto” platforms providing meaningful competition against a platoon of Microsoft/IBM engineers providing subsidized (for the moment) professional developer services. Does anyone try to learn Solidity lately?

Fighting the Universe is a Losing Proposition.

The big tech companies have to earn profits, and they are very good at it. Frequently enough, the majority of their product offering is helpful and priced in a reasonable manner… until it is not. The twin dark arts of built-in-obsolescence and built-in-inconvenience appear frequently to frustrate (and, over some time, eliminate) the utility/value of their products. I would have been very happy to have stayed on Windows 7 if it were still supported. My wife would have been fine with an iPhone 6 if Apple hadn’t deliberately slowed processing (presumably to drive sales of newer models). I’m a fan of the Brave browser and dealing with getting Microsoft Edge out of my way is a bit like trying to get my dog to stop barking. He’s a great dog and we love him, but enough with the barking already.

In contrast, truly decentralized platforms may provide a better model. The fact is that a capital formation model based upon the value proposition of a growing demand for a token against a static circulating supply is a revolutionary thing.4 It is not debt, and it is not equity. In fact, other than in so far as a token issuer needs enough money to facilitate adoption, the “utility”5 token holder need not care at all whether a token issuer is profitable. In many cases, the ideal is a distributed autonomous organization with sufficiently functional governance to run mostly of its own accord. Earnings are irrelevant. Key point: the token issuer’s incentives are to put out the best product possible in order to fuel adoption and user stickiness through the delivery of the best possible experience, thereby increasing token demand and value. No need for subscription fees; paid system upgrades; maintenance plans, etc. How can that not appeal?

All of this said, we still do not have much in the way of actual utility running on decentralized platforms. I’d love to see it happen. I certainly work to make it possible. For mainstream adoption, however, I don’t expect much in the way of practical choices. If you want to function in the world, you may have to pick a Borg and assimilate.

[1] All honesty, mobile communications is not my area of expertise. This is just my observation. I think it’s correct, but if anyone has a more informed opinion, please feel free to voice it.
[2] There are other options, Apple, Google Docs, Brave, etc., but it is safe to say that most of the world has a level of comfort with Microsoft for basic application software.
[3] Indeed, their business models (sales of consumer data, etc.) are not under attack and they are not incentivized to rock the boat.
[4] Note that the problem with the ICO craziness was not (for serious projects) the tokenomics, it was the complete lack of meaningful disclosure and compliance with securities laws. A subject of other articles.
[5] In the US, almost all capital formation transactions in “utility tokens” should be regulated as sales of securities. I use the term “utility” token only because most readers expect that term and understand what it means (even if my lawyer brain has a hard time accepting it).