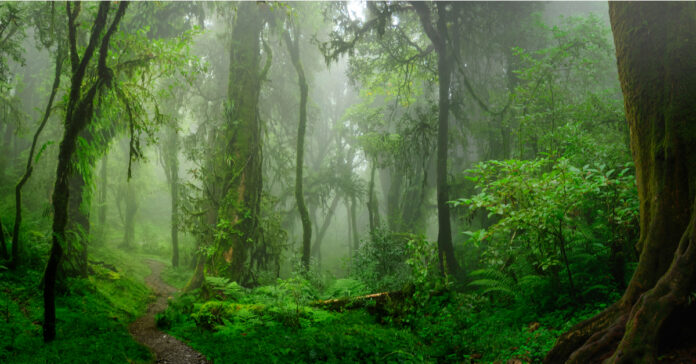 Now that the climate top in Glasgow has been wrapped up, and world leaders all flew home to their respective countries, we are kind of left with a slightly bitter taste in our mouths.

During the top there was a lot of agreement about what should be agreed about, and lots of plans and pledges were made, about carbon emissions, reduced use of coal, funding for sustainabily, but the list of actual agreements was deplorably low. Except for one, which is to end deforestation by 2030.

Nature-based solutions, particularly forests, have a vital role to play in mitigating the worst effects of climate change. And now, with a set date to aim for, pressure is mounting from governments and the public to rapidly roll out a global programme of well-executed nature-based solutions (NbS) to sequester several gigatons of carbon each year and protect biodiversity. However, current NbS projects are hampered by chronic underfunding.

As these deep challenges about how to fund and verify progress towards this goal are contemplated, blockchain could once again be the answer.

A new Cambridge centre to build a decentralized marketplace for carbon credits and support global reforestation efforts, could be the progress the natural world needs. The centre will bring together computer scientists and conservation scientists to get the job done.

Built on the energy-efficient self-upgradable Proof of Stake blockchain Tezos, The centre will use a combination of AI and satellite sensing to build a decentralised marketplace of verifiable carbon credits.

Based in the Department of Computer Science and Technology, and the Conservation Research Institute – the centre has two primary goals: to support students and researchers in the relevant areas of computer science, environmental science, and economics; and to create a decentralised marketplace where purchasers of carbon credits can confidently and directly fund trusted nature-based projects.

The Centre will build its decentralised marketplace on the Tezos blockchain because it operates sustainably, in line with the Centre’s vision to support a sustainable future through technology. The goal of the marketplace is to exponentially increase the number of real nature-based conservation and restoration projects by channelling funding towards them via market-based instruments.

“Current accreditation systems that measure and report the value of carbon and related benefits like biodiversity conservation and poverty reduction rendered by NbS are costly, slow and inaccurate,” said Centre Director Dr Anil Madhavapeddy. “These systems have undermined trust in NbS carbon credits. What is needed is a decentralised marketplace where purchasers of carbon credits can confidently and directly fund trusted nature-based projects. And that’s the gap the Centre is aiming to fill.”

Andrew Balmford, Professor of Zoology, said: “The recent announcement at COP26 of the new commitment to halt and reverse forest loss and land degradation by 2030 demonstrates the crucial role forests play in carbon capture and the health of our planet. The new Centre has a significant role to play in supporting crucial research to develop new, trusted mechanisms to support reforestation projects.”

The Centre will support 12 PhD students and postdoctoral fellows, and investment to prototype a scalable, trusted NbS marketplace. Researchers funded from the Centre will come from the Departments of Computer Science and Technology, Zoology, and Plant Sciences, as well as from the Centre for Doctoral Training in Artificial Intelligence for the study of Environment Risk.