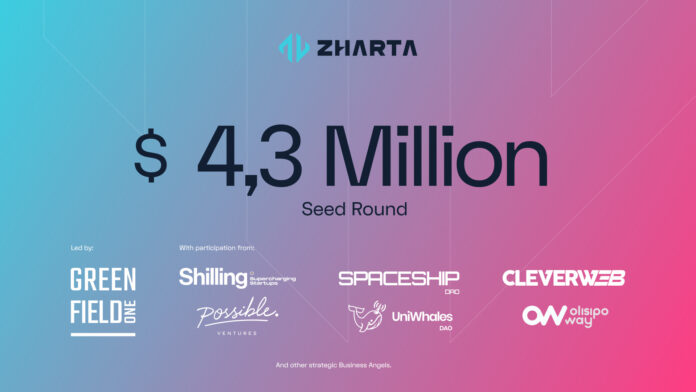 DeFi company Zharta, has secured seed funding from leading Web3 VCs and strategic investors to accelerate its growth to meet customer demand and go to market.

Zharta, creator of a lending protocol for instant NFT collateralized loans, has closed a seed round of 4 million dollars in new capital to fuel the company’s next phase of growth. The company had initially raised an acceleration round of $300,000 from angel investors.

Prominent investors include Lead Investor Greenfield One, followed by the institutional VCs Shilling Capital and Possible Ventures, core Web3 industry players SpaceShipDao and UniwhalesDao, as well as Clever, Olisipo Way, and other strategic Business Angels. This seed funding round was assisted by the Cuatrecasas Law Firm.

Zharta will allocate the new funds primarily to customer demands, followed by R&D, sales, and marketing. The goal is to accelerate market penetration and expand rollouts to improve the instant lending platform. To implement these goals, they will be adding up to 20 new hires to their current, 12-strong team.

“Zharta provides an important building block in NFT financialization. We are very pleased to be able to support Zharta as lead investor in bringing this great NFT use case to market quickly”, says David An, Partner at Greenfield One

Zharta has created a real-time lending model leveraged on Lending Pools and NFT appraisals with Machine Learning and aims at the DeFi and NFT native holders to quickly prove its platform’s potential, which the company ascribes to its 3 keystones: Simplicity, UX-oriented, and Trustworthy. Nuno Cortesão, Zharta’s co-founder and CEO, hopes that a strong customer-centric oriented foundation will enable them to expand: “We aim to deliver the best user-centric experience so that we can address a broader audience in the future,” said Nuno, “moving from early adopters to the mass market.”

Currently, the collections that can be collateralized are: Doodles, Mutant Ape Yacht Club, Bored Ape Kennel Club, World of Women, VeeFriends, Cool Cats, Hashmasks, and Pudgy Penguins, with “more collections being added in the near future”, guarantees the CEO.

“We’re bullish on the future of NFTs and their role in changing the landscape for climate tech, scientific innovation and data platforms more generally. As NFTs become ubiquitous, we see Zharta’s work to unlock liquidity as an essential part of the NFT ecosystem and believe that Nuno and the Zharta team will be important contributors to the NFT community,” said Possible Ventures Partner, Simon Leicht.

“We believe the right conditions exist for accelerating protocols at the intersection of DeFi and NFTs, so we couldn’t be more excited to support the Zharta team in this investment round. A core component of the infrastructure yet to be unlocked is collateralization – that’s where Zharta comes in, with a solution that provides liquidity to collectors and the general NFT market, while encouraging new parties to participate in the ecosystem.”  says Pedro Rosa, from Shilling.vc.

Zharta has already gone through a testing phase, during which it has collected user feedback to launch a platform that meets consumers’ wants, needs and concerns, enhancing the user experience. This phase also allowed them to solve security issues by auditing Smart-Contracts.

Zharta aims to leverage AI-appraisals and DeFi pools to fund NFTs. This includes existing assets such as collectables, but will also cover the emerging play2earn gaming, metaverse and art markets.

Evincing a grounded and pragmatic mentality, Zharta is not profligate. It focuses on solid growth and providing the market with a robust value offering that is financially sustainable. It wishes to establish good partnerships in Web3 and build on the value others have created, becoming a vital piece of the whole, building complex primitives, and integrating with institutional players. Zharta envisages a future where TradFi and DeFi reliably collaborate and where digital assets are treated with full respect in the financial system.