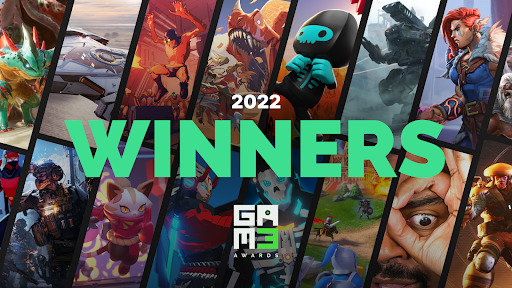 The winners of the Polkastarter GAM3 Awards, dubbed the Grammys for web3 gaming, have been crowned. The 16 winners were revealed at a live event, marking the conclusion of the inaugural industry awards.

The GAM3 Awards Game of the Year drew the most attention, celebrating the best web3 game that blurs the line between traditional and blockchain games. As for the Best Content Creator award, it saw 23 unique web3 gaming content creators receive nominations until the final day of voting to determine the top content creator.

October 23 marked the first GAM3 Awards announcement. Since then, hundreds of web3 games urged their communities to nominate and vote for them across different categories. Thousands of social posts were spread across partners, games, media outlets, content creators, and community members with an estimated reach of over 11M+.

Community voting played a role in deciding the final decisions with over 250,000 votes across all 16 categories. More than 40,000 unique voters participated and more than 13,000 tweets were sent using the hashtag #GAM3Awards.

Games were judged based on criteria that includes core loop, graphics, accessibility, replayability factor, fun elements and overall playing experience. To be eligible, games had to integrate and utilize blockchain tech, though the focus was on playability.

Nominees for the categories were chosen by an international jury of gaming, media and web3 outlets, selected for their unbiased perspective and quality focus. Each voting outlet completed a confidential, unranked ballot based on the collective and diverse opinion of its entire editorial staff, listing its top five choices in each category.